Metia is an advertising and marketing company based in Kirkland, Washington. Most of what I worked on was internal Sharepoint sites for Microsoft.

We had the opportunity to pitch ideas for developing a mobile game. There wasn’t a lot of time between projects, so the concepts had to be minimalistic. This was just to show off what our developers could achieve using HTML 5 canvas drawing. I came up with three ideas:

You’re a dog. Your master brought you to the park. You ran off and found a bone, and now you have to bury it before your master finds you. 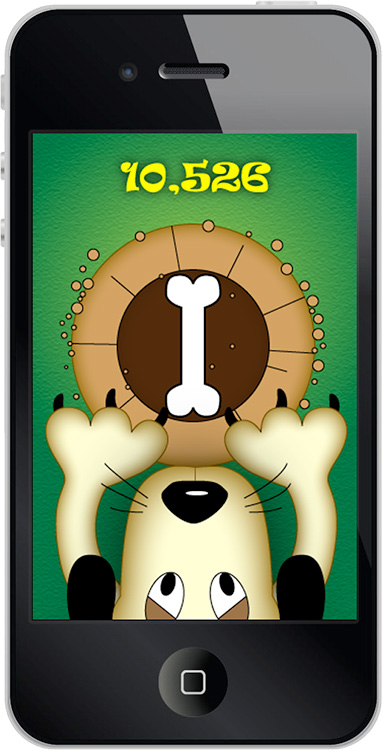 Perspective
Vertical, looking straight down to the ground. You can see the dog's snout at the bottom and his paws cover most of the screen as you swipe your fingers.
Gameplay
Using two fingers, swipe down rapidly to simulate digging dirt. The dog's paws would follow your fingers. Reach a certain distance, plant your bone, and refill the hole by swiping up before time runs out. The deeper you dig, the more points you score. There would be a clock on screen counting down, and/or have your master calling the dog's name. As the clockcounts down to zero, the dog's name would be called louder until your master picks you up.
Challenge
Different items you find in the dirt require different swipes. Small rocks have to be dug out slowly by swiping down. Big rocks have to be pushed away using one finger. Ants and worms have to be squashed by tapping on them. Doing the wrong swipe causes the dog to whine and makes him unable to dig for a few seconds.
Alternate titles
Paws Park
Hurry, Master's Coming!

Rain on my Parade

You’re a storm cloud. Rain on people and use your weather powers to make them miserable. 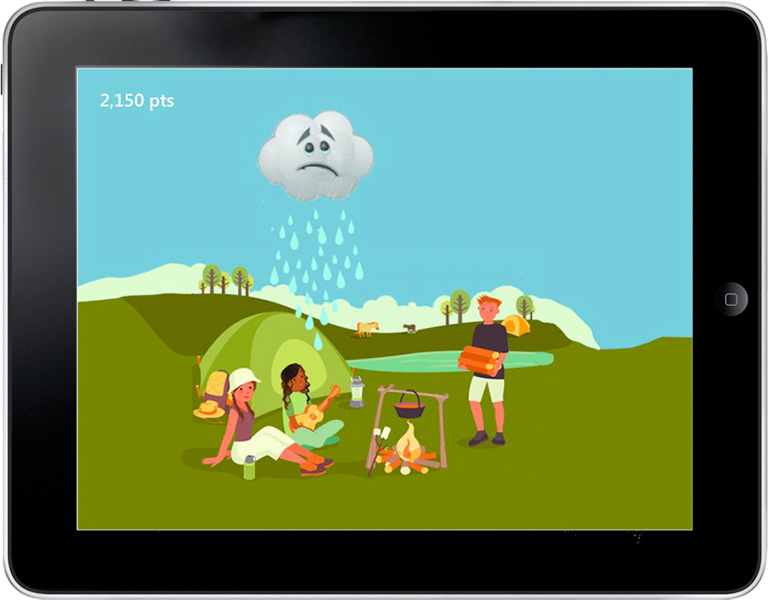 Perspective
Horizontal, viewed like a side-scrolling platformer, you move a storm cloud left to right above urban environments like a downtown street, a park, or a parade. People are doing things like exiting stores with packages, riding bicycles, hailing cabs, playing instruments, playing with pets, eating, smoking, and running.
Gameplay
Tap and drag your cloud around, performing gestures that cause rain, lightning, hail, ice, or high winds. Get points for raining on people, making them slip and fall. Some people, like bicyclists, are worth more points.
Challenge
There would be a delay between activating rain and having it fall on people (also due to the distance between your cloud and the ground). You would need to do different things to get through people's defenses. Yank an umbrella out of someone's hands by causing high winds, then rain on them. Lightning would scare people under trees in the park and send them out to get rained on. Ice could trip up runners and cyclists. Smokers would have to be followed and rained on until they ran out of cigarettes.
Alternate titles
Cloud vs. Parade
Raincloud
Drizzler
Zap!

You’re trying to leave early on a Friday. Make it from your desk to the exit, gathering supplies from your coworkers to fight your supervisors and escape.

Perspective
Vertical, 2D overhead like Legend of Zelda while moving around an office environment. Battle scenes would use Pokemon's back/front design.
Gameplay
There's a clock on the screen timing how long it takes you to get to the exit (e.g. you start at 2:30 PM). Your supervisors are waiting along the corridors to challenge you like Pokemon's inescapable trainers. When you come too close, you get into a "meeting" and have to duel them. This plays out like rock/paper/scissors with you and your boss taking turns on offense and defense.
If you pick incorrectly on defense, you lose a morale point. Lose them all and it's game over. You can gain morale by stopping at coworker's cubicles and drinking their coffee or eating their candy bars.
Challenge
The rock/paper/scissors combat is randomized and could let lucky players breeze through or quickly fail the unfortunate. Putting a timer on the player's escape means morale point recovery will be judged against the time it takes to search cubicles.
Alternate titles
Metia Office Escape
Officémon
Friday Night Escape